The Turkish Central Bank has announced a plan to ban cryptocurrencies as a form of payment effective April 30th. According to Bloomberg, the Turkish Central bank believes that the anonymity behind digital assets has the potential to cause ‘non-recoverable’ losses to users.

Furthermore, the number of complaints by Turkish residents surrounding cryptocurrencies has increased by 8,616% from February last year. As a result, the ban will go ahead and prohibit financial companies from handling or processing payments related to cryptocurrencies.

Bitcoin (BTC) Drops to $60k and Could Keep Falling

Before news broke of Turkey banning the use of cryptocurrency as a form of payment, Bitcoin was comfortable consolidating at the $63k support zone. At the time of writing, and since news of the ban hit the internet, Bitcoin has dropped to a local low of $60,050 signifying a 4.7% drop in less than 12 hours.

A look at the daily BTC/USDT chart below reveals that Bitcoin has entered a correction with the 50-day moving average providing an area of macro support around the $56k price area. 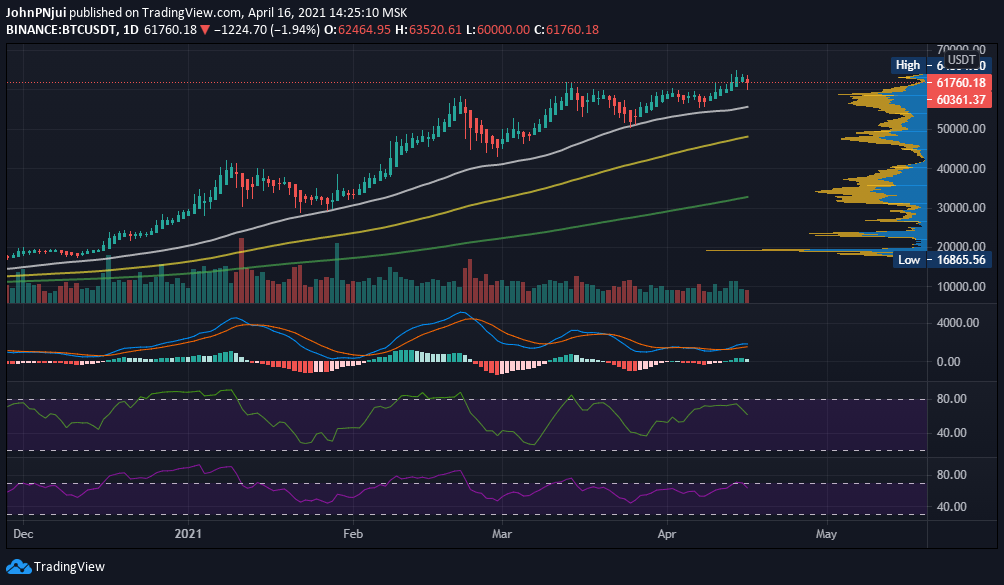 Also from the chart, it can be observed that the daily MACD confirms a potential correction for Bitcoin. The length of the MACD histograms reveals a reduction of buying by the Bitcoin bulls. The daily MFI and RSI are also indicating an ongoing pullback for the King of Crypto that could continue till the end of the month of April.

With respect to support zones, Bitcoin has the following price areas that could offer a soft landing before the crucial $58k support.

Failure of $58k to hold will most likely lead to a retest of the aforementioned 50-day moving average.

Dogecoin and Shiba Inu spike in price, this coin may be next